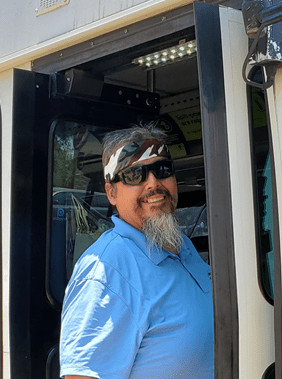 PHOENIX, AZ – Valley Metro and Total Transit, as part of National Express Transit, honored bus operator Jeff Ivans for driving one million miles without a preventable accident.  Jeff has been driving buses since being hired by Total Transit for over 11 years and has demonstrated a dedication to excellence and safety.

Jeff states that when he came to Total Transit, he enjoyed the feeling of being part of a small family-friendly company and has remained here ever since.

“We’re proud to have Jeff Ivans serving our communities. He has proven himself to be a reliable bus operator dedicated to transporting passengers safely. Congratulations to Jeff on his milestone accomplishment,” said Scott Wisner, Valley Metro Bus Service Delivery Manager.

Jeff is married with three children and enjoys spending time together watching movies. In addition, Jeff rides his motorcycle every chance he gets.

Jeff was originally hired by Total Transit in 2009 as a transit driver, where he first illustrated his dedication to excellence. After many years in that position, he continues to operate both Express routes as well as Avondale Zoom Circulator.  Jeff has logged 25,000 hours worked without an accident in achieving the Million-Mile Award.

Jeff’s safety record has earned him membership into Total Transit’s Million Mile Club, which is part of a program sponsored by the National Safety Council to reward bus and van operators for safe vehicle operations.