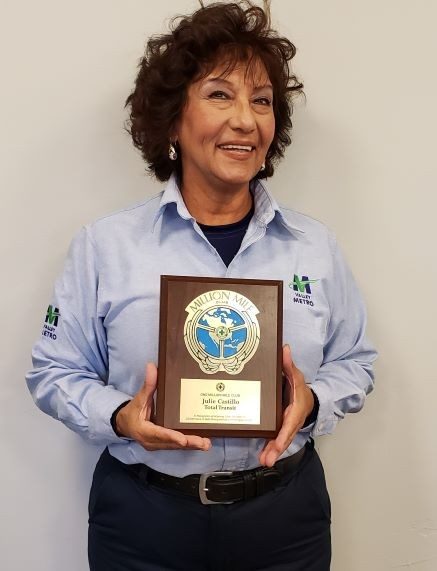 Phoenix, AZ — Valley Metro and Total Transit, as part of National Express, honored bus operator Julie Castillo for driving one million miles accident-free behind the wheel of a bus.  Castillo has been driving buses since being hired by Total Transit for over 11 years ago, and has since demonstrated a dedication to excellence and safety.

Several years ago, Julie and her family decided to take a vacation to Arizona and, after being enamored with the many scenic views and hospitality, she and her family made the decision to make her once vacation spot into their permanent home.  After arriving in Arizona, she was persuaded by friends to attain a CDL and the rest is history.

Julie was originally hired by Total Transit in 2001 as a medical transport driver, where she first illustrated her dedication to excellence. After many years in that position, she began to drive the Wickenburg route in 2008, which ultimately led her to the Avondale Zoom Circulator. It was during this time that Julie accomplished an incredible feat: her million-mile safe driving goal by logging 25,000 hours worked without an accident.

Castillo’s safety record has earned her membership into Total Transit’s Million Mile Club, which is part of a program sponsored by the National Safety Council to reward bus and van operators for safe vehicle operations.