We are committed to our customers, our passengers and our employees. 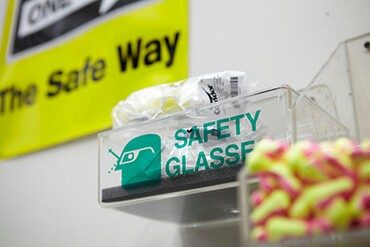 Our company-wide global safety development campaign, Driving Out Harm, has been proven to promote consistency in our safety practices. This campaign demonstrates our intense commitment to safe operations throughout our organization. These policies include a range of standards for our leadership, as well as individual competence and accountability. Driving Out Harm embraces our corporate safety value through the strict implementation of our twelve Global Standards. These safety initiatives tighten our control on safety risks in all key areas.

A proven thought-leader in safety, National Express Transit (NEXT) has crafted proprietary company-wide programs that establish and enforce strict safety and management standards. Our innovative Frontline Position Candidate Screening ensures a safe, consistent, and pleasurable experience for all riders. With NEXT on board, it’s an easy road ahead.

A worldwide leader in Fixed Route and Paratransit solutions, National Express Transit (NEXT) has the experience and expertise to make sure there are no bumps along the way. NEXT is the transit division of National Express LLC (NELLC). As a subsidiary of National Express Group, NELLC is backed by the strength and history of one of the world’s leading public transit companies. Every contract is handled by a dedicated local team who delivers the professionalism and personal attention you’re looking for. Safety is always Job 1.

Learn about our exclusive “Find my ride!” app

Director of Business Development
About Rick

Director of Human Resources
About Ivy

Director of Maintenance
About Wayne

Matt Wood is the Chief Operating Officer for National Express Transit (NEXT).  Matt joined NEXT in 2018 after nearly 15 years in high-level leadership roles in the transit industry.  Matt has extensive experience in both fixed route and paratransit operations and has led business units with revenues ranging from $25 million to $350 million.  His management style is defined by his relationships with his customers and employees, focused on customer service, efficiency, and safety.

Joseph Baker is COO, Coach & SVP Business Development.  He joined National Express in November 2016 after a 10-year career with Hertz Global, most recently as Vice President of Operations in Southern California.  Joe’s 15-year leadership career in the service and transportation industry also includes holding senior-level operational positions with Safeway Inc. and Wal-Mart Inc.  Joe has extensive experience in cultural transformation, process improvement, and leadership development.  He is a Certified Lean Six Sigma Green Belt and also a leadership speaker who believes in the correlation between operational execution and high engagement work environments.  Joe oversaw a fleet of 70,000 vehicles with Hertz and managed over 5,000 employees in Southern California and Las Vegas Nevada.  He strongly believes in the core company values of safety, community, and service excellence as the bedrock to our continued growth in the marketplace.

Mark Foster has provided public transportation service for more than 38 years. He understands the importance of having the best employees working with him, having enough employees to operate the system, taking care of the customer, and most importantly, ensuring the safety of the customers that are transported. Through his career (starting with R.W. Harmon and Sons), he worked as a mechanic, bus driver, manager of major bus operations and was promoted to senior management in every company with which he has been associated. Mark possesses strong leadership skills and is proficient atdeveloping and leading effective management teams focused on goals for growth, safety and quality service. At a single time Mark has been responsible for as many as 100 transit properties and over 10,000 employees in the transportation industry.

Kevin Kilner has been engaged in public transportation service for 28 years. Serving in roles that range from operator to VP of Safety in both private and public companies, Kevin has had the opportunity to serve in operations, maintenance, accounting, human resources, safety & training and consulting. In 2014 Kevin chose to leave the consulting world and return to working inside the industry, which brought Kevin to the National Express family. Kevin currently serves as the Vice President of Safety holding a Bachelor’s Degree in Operations Management from SUNY and a CSHM designation from the Institute for Safety and Health Management.  Through Kevin’s experiences, he has learned safety is all about behaviors, and when we get the behaviors right everything else follows.

National Express Transit (NEXT) is pleased to introduce Rick Pulido, one of our Directors of Business Development.  Rick joins the National Express team with 32 years of transit operations and business development experience.  He hired, trained, supervised, and managed over 5,000 transit professionals at 20 locations nationwide in past positions, and was responsible for over $600 million in sales of transit, shuttle, fixed-route, and ADA paratransit service contracts during his career.

Bill Unverzagt is the Chief Financial Officer of National Express Transit Corporation (NEXT), a role he has held since April 2018. Bill has over 20 years of corporate finance leadership experience and previously served as Vice President of Finance and Corporate Controller of National Express for six years. Bill is a CPA whose prior roles include finance leadership positions at Redbox and ServiceMaster, and he began his career at KPMG.

Wayne Johnson joined National Express in August of 2019 as a Region Maintenance Manager.  Wayne brings with him over 27 years of experience in fleet maintenance with 20 years in Fleet Maintenance Management experience in the School Bus/Transit Bus Industry. Wayne’s expertise includes managing fleet departments with focus on cost containment through Lean Practices, rigid preventative maintenance standards, purchasing, education, inventory control, and regulatory compliance. Wayne is a graduate of Dakota County Community College with a diploma in Heavy Duty diesel Technology and also served in the U.S. Army as a Heavy Wheel Vehicle Technician from 1990 to 1993.

Our mission is providing the safest, highest-quality transportation services — on time, every time.

Our vision is to deliver service excellence to earn the partnership, loyalty, and trust of our customers and employees with an operational focus on our five core values: Safety, Customer, People, Community, and Excellence.

We place them at the heart of our business and relentlessly meet their expectations.

We constantly strive to be excellent in all that we do.​